The Jackson Rockabillys released their 2023 game schedule today, which features 60 games (30 home and 30 away), with all home games at their Jackson Rockabillys Baseball Stadium. The team also announced that every scheduled home game would begin at 6:30 pm, with gates opening at 5:30 pm. The 2023 Prospect League season starts on Wednesday, May 31st, with the Rockabillys opening on the road at Southern Illinois (Marion) for two games, before coming home to Jackson for their inaugural giant Home Opening Night on Friday, June 2nd against the Cape (Girardeau) Catfish. Twenty-nine additional home games will follow Opening Night. After the conclusion of the 1st half on July 1st, there will be a first-half champion determined from each of the four divisions. A second-half champion will be determined at the regular season final games on August 5th. The post-season playoffs begin, first with each divisional champion, then an Eastern & Western Conference champion, then a best-of-three Prospect League Championship series. Included in the 60-game inaugural season are two Rival Series exhibition games with Southern Illinois on June 26th and July 19th.

“After much anticipation and hundreds of hours in its creation, we are proud to have our inaugural 2023 Rockabillys schedule in hand finally,” remarked Rockabillys President Dennis Bastien. “Now we can get to work putting promotional nights, giveaway nights, company nights, and game events together for what will prove to be a great summer of exciting summer collegiate baseball!”

The Jackson Rockabillys and the soon-to-be-named team in Marion, Illinois are the newest additions to the Prospect League making their inaugural debut in 2023.  The Rockabillys will play in the southern most division of the Western Conference.

2023 Reserved Seat Season tickets are available online at www.rockabillysbaseball.com and at the Rockabillys office.  Single game tickets will be available at a later date. 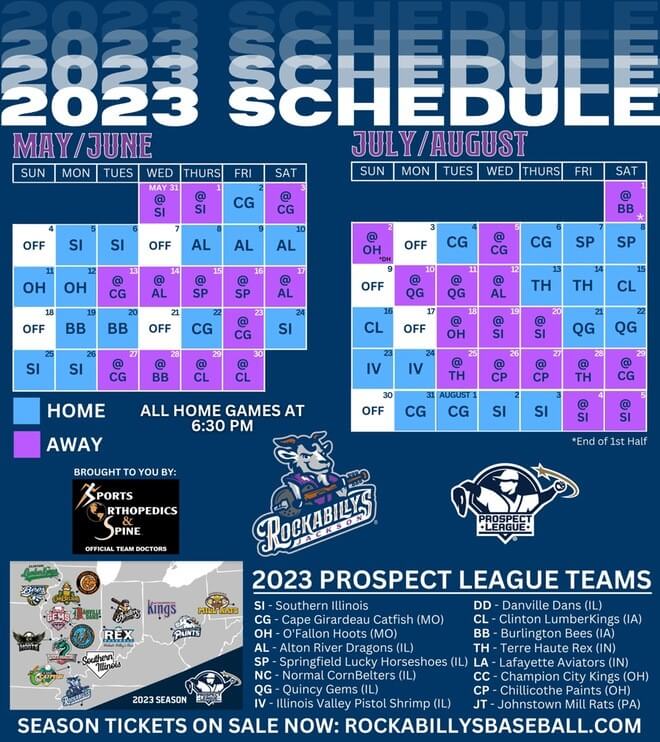 The Ballpark at Jackson