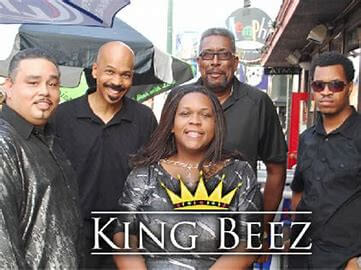 "On Saturday, August 27, Shiloh National Military Park, will celebrate the 106th anniversary of the National Park Service (NPS) which falls on August 25, 2022. From sea to shining sea,

“On Saturday, August 27, Shiloh National Military Park, will celebrate the 106th anniversary of the National Park Service (NPS) which falls on August 25, 2022. From sea to shining sea, park visitors and NPS employees will commemorate the founding of the Park Service with special programs and events all around the country. Shiloh Battlefield celebrated the NPS anniversary from 2016-2019 with its Concert-in-the-Park music series. After a brief hiatus due to the pandemic, Shiloh will again host the August 27th NPS Birthday Bash show with world class entertainment for concert goers.

Shiloh National Military Park, in partnership with the Friends of Shiloh and Tour Hardin County, are proud to present another night of music on the battlefield starring rhythm and blues artists The King Beez from Beale Street in Memphis. “This is the first concert in the park in three years and it should prove to be a night to remember as we celebrate the NPS birthday,” said Park Superintendent Allen Etheridge.

The King Beez have been a staple on Beale Street for more than two decades and have set the standard for R & B bands in Memphis. They have taken Memphis music around the world performing with artists such as Rufus Thomas, Isaac Hayes, Al Green, Shirley Brown, and Jay Blackfoot.  At B.B. King’s Blues Club on Beale Street they served as the backup band for the late Ruby Wilson for more than ten years.

The opening act on the bill will be The NPS Arrowhead Jazz Band from New Orleans Jazz National Historical Park in New Orleans. These world class musicians preserve the New Orleans music traditions with daily performances of jazz and blues. “We are excited to bring these musician/historians to play at Shiloh so the community can appreciate the preservation of a truly American artform,” said Etheridge. As their motto says, “Only in New Orleans could there be a national park dedicated to jazz music.”

The concert begins at 5:30 pm and is free of charge. Concert goers are encouraged to bring picnic baskets, and lawn chairs or blankets. A Junior Ranger booth with many activities for the kids will be open from noon until dark. For more information go to www.nps.gov/shil or call the park Visitor Center at 731-689-5696.”