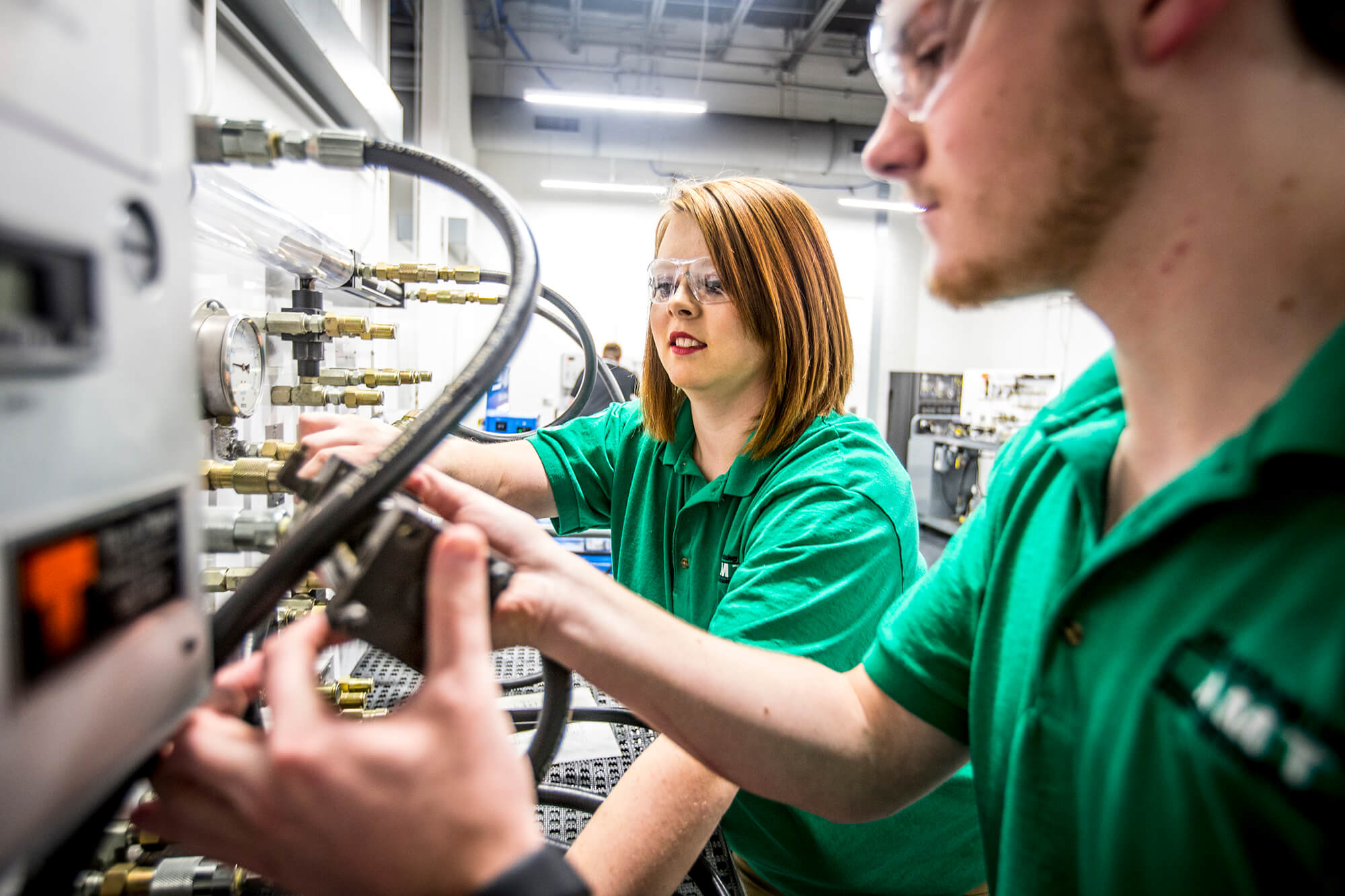 Asia Ricketts and AMT cohort James Box practice skills on a pneumatics trainer in a engineering systems lab at JSCC.

The 26-year-old Huntingdon resident, however, has embraced the program. She attends classes two days a week at Jackson State and learns hands-on experience while working three days a week as a co-op employee at Toyota Bodine in Jackson.

“I like to fix things,” Ricketts said. “I like manufacturing work. It offers stability, a good salary and great benefits – especially for our area.”

As a co-op employee, Ricketts is making about $12 an hour. Within two to three years after she graduates and continues to increase her skills, she has the potential to be earning more than $28 an hour, said Jason Bates, Toyota Bodine plant administrator.

“To be in the AMT co-op, one must apply, interview, and be hired by one of the manufacturers in the consortium,” she explained. “The co-op, which is part of JSCC’s accredited Engineering System’s Program, is providing a cutting-edge curriculum. It offers employers peace of mind when filling maintenance positions because the employers know they are getting a quality employee who has real-life experience.”

Ricketts, who began courses in August, went through the interview and selection process last May.

Roberts agreed. “Asia is an outstanding student and leader. She has earned the respect of not only her professors and employer, but also the students.”

A maintenance technician at Toyota Bodine is multi-skilled, Bates said. On any given day, Ricketts will troubleshoot equipment in hydraulics, robotics, electrical or other areas.

Ricketts is attending Jackson State on a PELL grant. (For students who don’t qualify for a PELL grant, Tennessee offers adults who return to school for a degree or certificate two years of free tuition at a community college or technical school through Tennessee Reconnect.)

The road for Ricketts to become a full-time team employee at Toyota Bodine starts with completing her co-op requirements and graduating in two years with an associate of applied science degree in Engineering Systems.

Then, after passing a test given by Toyota Bodine, she’ll be hired for a six-month internship at the engine block manufacturer where she will continue to increase her skills.

Getting the offer of a full-time job depends on openings at the plant, Bates said, “but we’ve always had an opening.” In fact, Toyota Bodine currently has four positions open for maintenance technicians. By 2020, Bates estimates there will be three million tech positions across the country that can’t be filled.

The AMT co-op students, who are encouraged to tell their friends and former classmates about the AMT co-op, do a great job of recruiting, Roberts said. “We have found that the most difficult group of people to convince that manufacturing is a viable and lucrative career is parents.” They change their minds, however, after they learn more about the opportunities, she said.

As the first and only woman so far in the AMT co-op, Ricketts is fighting the perception that manufacturing maintenance is for men only – it’s too hard for women to do.

“It’s always been said that it’s a man’s world in the factory,” Ricketts said. “But that’s not true anymore. It’s not as physically strenuous as some people think. Women bring different ideas to the table; we think about things differently. My hope is that other women see they can do this, too.”