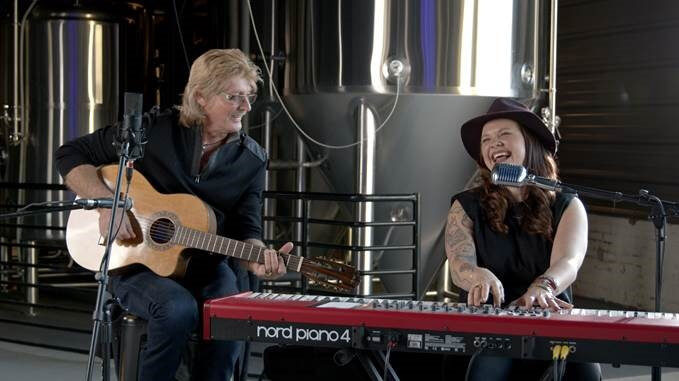 “We have such a rich and diverse music scene in Jackson,” Executive Director of Visit Jackson TN, Lori Nunnery, said. “We're very excited to launch Hidden Tracks as a way to share the stories of such great musicians, and let the world know of all the local talent and upcoming events we have.”

LOLO and Stan met for the first time at Hub City Brewing for an interview with Jackson Hidden Tracks where they shared their love for Jackson and its musical roots, told stories, and played a few songs together. At the end of the interview, they played “Blue Suede Shoes'' as a tribute to Stan’s father, Carl Perkins. To see the full video, which was done in just one take, visit www.JacksonHiddenTracks.com.

“Your dad has left a tremendous impression,” LOLO said to Stan Perkins, “not just here but all over the world.”

The song, “Blue Suede Shoes,” was originally written and recorded by Jackson native and rockabilly legend, Carl Perkins, in 1955 at Sun Records in Memphis, Tenn. It is considered to be one of the very first rockabilly records ever to be produced, which led to the beginning of classic rock ‘n’ roll music.

“It’s a classic, and it’s timeless,” Stan Perkins said. “As long as people are listening to music, that will be played. Somewhere. Either by Carl Perkins or Elvis Presley. One of the two.”

Jackson’s not only home to rockabilly legends, but also home to a newer generation of musicians like singer-songwriter LOLO who’s known for writing chart-topping hits like “Miss Jackson” and “High Hopes,” performed by Panic! At the Disco, as well as her vibrant singles such as “Shine” and “Not Gonna Let You Walk Away.”

After years of living in New York City, she recently moved back home to Jackson where she draws a lot of her inspiration.

“Pretty much anything I've ever written that’s gone on to be any form of success, I've written here—not anywhere else, but here,” LOLO said. “And quite honestly, in the room of my childhood home.”