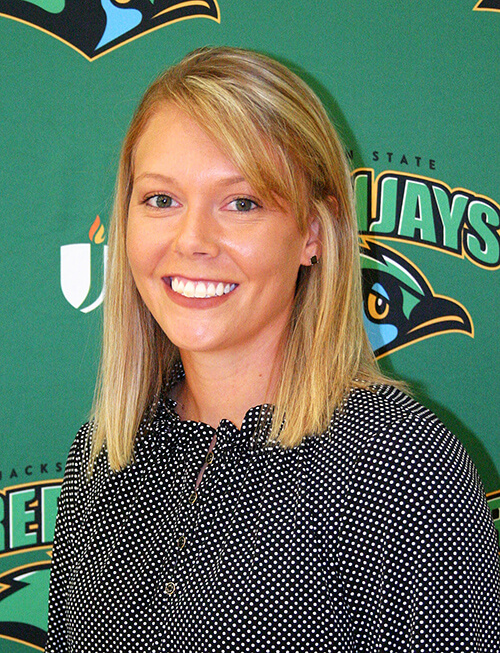 “We are extremely happy for the addition of Taylor to the Green Jays’ coaching staff at Jackson State,” said JSCC Athletic Director Steve Cornelison. “Taylor is an exemplary athlete with a passion for game of softball. We look forward to the excitement and energy she will bring to the program.”

Graduating her 2012 South Gibson class as salutatorian, Taylor was a Wendy’s High School Heisman nominee as a senior after lettering in softball, basketball, soccer and running cross-country. She was honored as All-District 15-A all four years in high school, All-Tournament Team 2010-2012, All-State Team Honorable Mention in 2010, Jackson Sun Second Team All-West Tennessee in 2010 and All-State Second Team in 2012. She was the West Tennessee All-Star Game MVP in 2012. Moore was also a part of the 2010 ASA National Championship team with Impact Fastpitch.

Moore was an All-District selection for 2010-2012 for both soccer and basketball, and All-Tournament Team selection in 2012 for basketball. She was honored on the All-State Teams as an Honorable Mention in 2011, and Second Team in 2012 as a soccer standout.

In addition to her involvement with South Gibson athletics, Moore was a Student Ambassador and the Homecoming Queen and also participated in Beta Club, Fellowship of Christian Athletes, Future Farmers of America, and Future Business Leaders of America.

After high school, Moore was a student-athlete at Dyersburg State Community College. She graduated with an A.A. in Science in 2014. During her time at DSCC, she was a career .365 hitter for DSCC with 57 total hits, 15 doubles, one triple, five homeruns, and 56 RBI. She was nominated Most Valuable Player in 2013-14 season, and All-Conference First Team in 2014.

Upon graduating DSCC, Moore continued play at Martin Methodist College in Pulaski, TN. At Martin Methodist, Moore was a heavily regarded defensive player for the RedHawks and spent two seasons as starting third baseman. She was a career .301 hitter for MMC with 97 total hits, 14 doubles, four triples, five homeruns, and 53 RBI. She served as the President of Fellowship of Christian Athletes and the Biology Club. Moore graduated with a B.S. in Biology with a minor in Chemistry in 2017.

While finishing up her B.S. degree, Moore stayed involved in the softball program as the student-assistant. After graduation, she was hired as full-time assistant for the softball program, and was in that role for the last two years. Moore graduated in May of 2019 with her Master of Business Administration from Martin Methodist College, and is a member of Sigma Beta Delta.