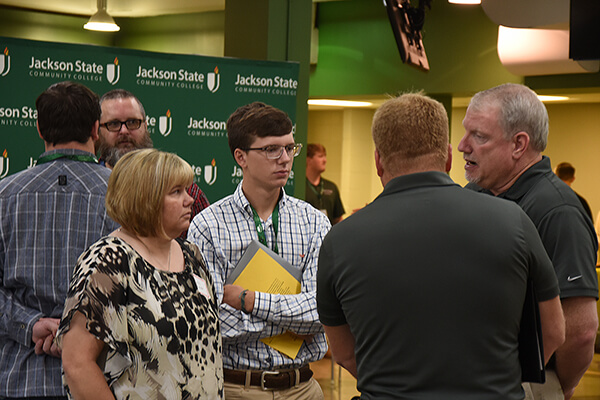 Students of Jackson State Community College’s Advanced Maintenance Technician (AMT) work cooperative met with their new employers at a reception on Tuesday, July 20. The event, held in the Student Center, marks the beginning of the cooperative’s eighth year.

The 22 students in the Engineering Systems Technology program met with 20 manufacturers and are now ready to begin the two years of classes and on-the-job training that will then lead to a great-paying career as a highly-skilled maintenance technician.

Over the past eight years, the consortium of manufacturers partnering with JSCC has grown from 15 to 30 members. Local manufacturers created this consortium as a partnership with JSCC in an effort to address the severe shortage of skilled trades that exists locally and nationwide.

Since the creation of the AMT work cooperative in 2014, 133 graduates have been employed with area businesses and other locations around the globe. AMT Completion Coordinator Cathi Roberts said that around 20 students are admitted in the cohort every year. “We would like to recruit as many as 40 students every year,” said Roberts, “but the old perceptions of manufacturing environments still prevail and keep many people from considering this awesome opportunity.”

Manufacturing jobs have transformed through the years. Safety is the priority, and working conditions have dramatically improved. They require highly skilled employees, and annual wages typically range from $42,000 to $60,000.

“It’s not uncommon for our graduates to earn an annual salary of $75,000 after a couple of years on the job,” said Roberts. “In fact, there have been a number of graduates who have exceeded $100,000 due to the abundance of overtime opportunities at many companies.”

Roberts notes that students who complete the 5-semester work cooperative are all but guaranteed that they will be in a great-paying job the Monday following graduation. “Every graduate has employment offers prior to graduation,” she said.

Students attend two full days of classes each week, learning subjects such as electricity, fluid power, mechanics, automation and robotics. They spend three days working at a local manufacturing company. They are paid for their work on a graduated scale, earning $15 an hour during the first semester and $17 an hour during the last semester. When students take advantage of either Tennessee Promise or Tennessee Reconnect scholarships, a graduate is able to earn their degree and incur no debt.

To participate, students enrolled at Jackson State must complete a job application and write a 500-word essay. They then attend a series of interviews over the course of an hour with representatives from local manufacturing companies. The companies then select the students that are the best fit.

More information about the admissions process and an application for the AMT program, visit JSCC.edu/amt or contact Roberts at 731-425-9584 or email her at CRoberts7@jscc.edu.