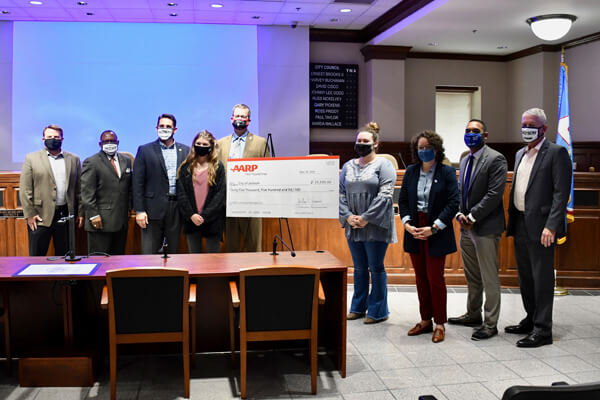 The City of Jackson, TN was selected to receive an AARP Community Challenge grant. Jackson is one of only 184 grantees selected from across all 50 states, Washington D.C, Puerto Rico and the U.S. Virgin Islands.

This “quick-action” grant will be used to improve the city’s transportation accessibility and communications by creating a smartphone app that provides real-time information about public buses.

The idea for the mobile app came out of a competition between college and university students called the Hub City Innovation Cup. With nine teams and almost 40 student participants from three area universities this year, the winning idea came from Union University students. These students are Carly Bryant, Grace Ingram, Lauren Kinzinger, Callie Wright and Sydney Zemke. This competition is sponsored by Jackson Energy Authority and is a partnership with the Jackson Chamber of Commerce, theCO, Lane University, University of Memphis-Lambuth and Union University.

“We are incredibly proud that AARP selected The City of Jackson, TN to receive this grant,” stated Mayor Scott Conger. “AARP is a nationwide leader on making neighborhoods, towns, and cities more livable for all residents and we are honored that they see the tangible value this project will bring to our community.”

About the Community Challenge:

It’s all part of AARP’s nationwide work on livable communities, which supports the efforts of neighborhoods, towns, cities and counties across the country to become great places for all residents. AARP believes that communities should provide safe, walkable streets; affordable and accessible housing and transportation options; access to needed services; and opportunities for residents to participate in community life.

To learn more about the work being funded by the AARP Community Challenge across the nation – including all 184 granted projects this year, visit www.AARP.org/CommunityChallenge. You can also view an interactive map of all Community Challenge projects and AARP’s livable communities work at AARP.org/Livable.