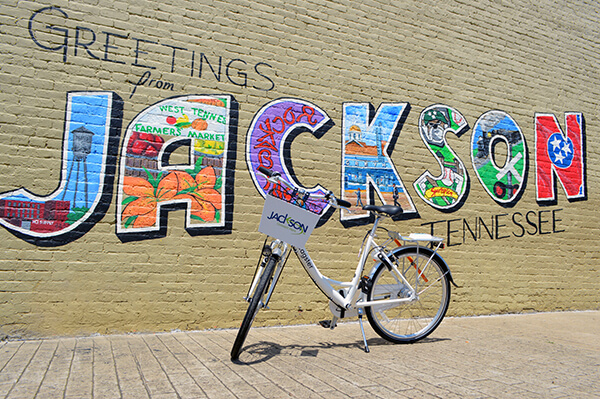 The City of Jackson and the Jackson Chamber have partnered with Zagster to bring bike sharing to Jackson. The announcement was made June 10 during the second day of the Rockabilly Gran Prix cycling races as area officials took a fun lap around Downtown Jackson on the new bikes.

“Bike sharing is important to the quality of life of our city,” says Stan Pilant, director of planning, City of Jackson. “With Zagster, we are able to provide new mobility options that are both fun and healthy.”

The City of Jackson, West Tennessee Healthcare and Toyota have all invested in the new program. The Jackson Chamber and Visit Jackson both helped facilitate the development and launch of Zagster.

"At Toyota, we're transforming into a mobility company and creating new ways for people to move across town or across the room. By supporting bike sharing in the City of Jackson, we believe we’re helping to enable the freedom of movement and providing better access to jobs, education, opportunity and fulfillment for our community," said Shawn Daly, Toyota Bodine plant manager. “Toyota Bodine is celebrating 15 years in Jackson, and we are proud to contribute to the area’s progress and to its future.”

Locations for the bicycles include downtown Jackson at 223 North Highland near the Grubb’s Grocery; The Jackson-Madison County General Hospital, 620 Skyline Drive, near the Emergency Walk-In entrance; Lane College at 545 Lane Avenue near Saunders Hall, and Union University, 1050 Union University Drive near the Bowld Student Commons.

Across the nation about half of the people that say they want to bike more often do not own a bike, hence bike sharing was born. Zagster is the leading bike share program in the U.S., operating more than 200 bike share programs in 35 states across the U.S. and making bicycles available to over 6.5 million people.