The Lane Homecoming football game is the culmination of a week long festivities happening all over Jackson.

The week kicks off on Sunday, October 13, 2019 with a Praise Factor Gospel Concert at 6 p.m. in the CMAC Auditorium. At 11 a.m. Monday, October 14, is the Homecoming Opening Prayer Service in front of Bray Hall.

Midnight Madness kicks off the 2019-2020 men's and women's basketball seasons with scrimmages Tuesday, October 15,  evening at midnight in the J.F. Lane Gymnasium.

One of the highlights of the week is the Homecoming Chapel Service at 11:00 a.m. Wednesday, October 16, in the J.F. Lane Gym.

Saturday, October 19,  begins the day long festivities with the Lane College Homecoming Parade beginning at 8:30 a.m. with tailgating outside of Lane Field at noon followed by the 2019 Homecoming football game against Kentucky State kicking off at 2:00 p.m.at Lane Field. 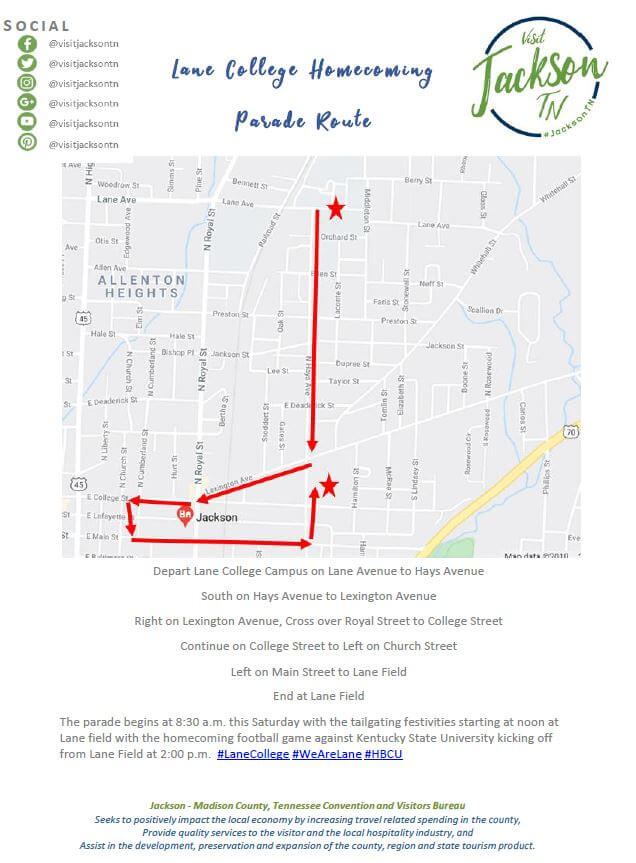 In a 2015 interview with WBBJ-TV, Lori Nunnery, Executive Director of the Jackson Convention and Visitors Bureau, spoke of the economic impact the city receives from the Lane homecoming annually.  “Lane has a significant impact on Jackson,” Nunnery, said. “They fill up our hotels, they visit our restaurants, they shop.

“We average 2,500 hotel rooms here and so those fill up rather  quickly, and I know that people are on the waiting list to try and get in, and this spills out into our surrounding communities as well.”

City of Jackson Mayor Scott Conger, a 2008 graduate of Lane College, said he's excited for the week and appreciates that the week-long events have on the city of Jackson and the surrounding areas.

"I would like to welcome my fellow Lane College alumni and friends back to the City of Jackson for our 2019 Homecoming," Conger said. "Lane College Homecoming weekend provides the largest economic impact, on the city, of any annual event. We hope you enjoy homecoming this year. Go Dragons!"