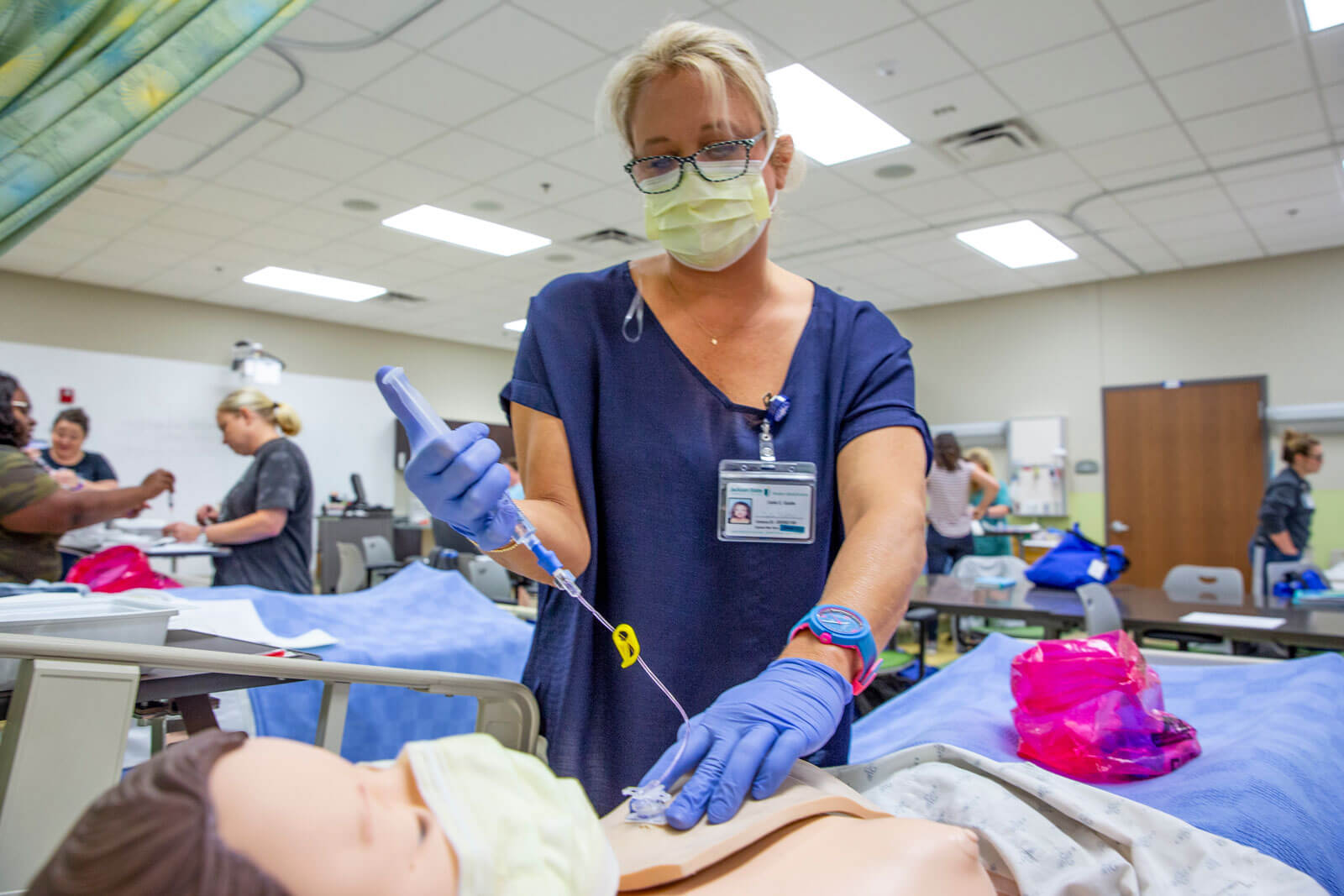 JSCC nursing student practices with a mannequin in the skills lab.

The nursing graduates at Jackson State Community College have done it again.

Every student who graduated from Jackson State’s nursing program in 2020 passed the National Council Licensure Examination (NCLEX-RN) on his or her first attempt.

The 100 percent pass rate on the first attempt is an accomplishment the nursing graduates have achieved many times in the nursing program’s 30-year history. The NCLEX-RN is the national exam all nursing school graduates must pass to obtain a license to practice as a registered nurse. It is administered by the National Council of State Boards of Nursing.

The Jackson State graduates, who earn a two-year associate degree in nursing, take the same licensing exam as students who attend a four-year university and consistently exceed the national norm on the exam, said Dr. Leslie West Sands, Dean and Program Director of Nursing.

“Jackson State’s nursing program is one of the most respected programs in the state,” she said.

West Sands said that registered nurses who earn their degree in two years at Jackson State save both time and money. “The associate degree route is the fastest and least expensive avenue to become an RN.”

Jackson State graduates a new group of potential registered nurses each May and December; new students are admitted every semester. All graduates who decide to go to work have jobs waiting for them, she said. “We need more nurses. There are unfilled positions for registered nurses in our community.”

The college generally graduates 70 to 80 nurses a year.

“Nursing is a challenging career that is also incredibly rewarding,” West Sands said. “Nurses have an impact in people’s lives in times of crisis and also in times of great joy. When you are in the hospital, it is a nurse who monitors your health around the clock.”

West Sands, who started Jackson State’s nursing program in 1990, said that students in the program have smaller classes and more individual attention to help them master the challenging work. Clinicals, where the students observe and help treat patients, start three weeks into the first semester.

On campus, students learn in the Jim Moss Center for Nursing, which opened in 2015. It features state-of-the-art labs and equipment that use the same technologies as hospitals. Equipment in the facility includes human obstetric, pediatric, and adult simulators that enable faculty to simulate real-life scenarios.

Jackson State is taking applications for the nursing class that starts in January 2022. The August class has been accepted, West Sands said.

“I am proud of our program,” she said. “We want to encourage people to become nurses. We would love to talk to anyone who is considering a career in nursing.”