Cohen honored by WeTALC for contributions to library profession 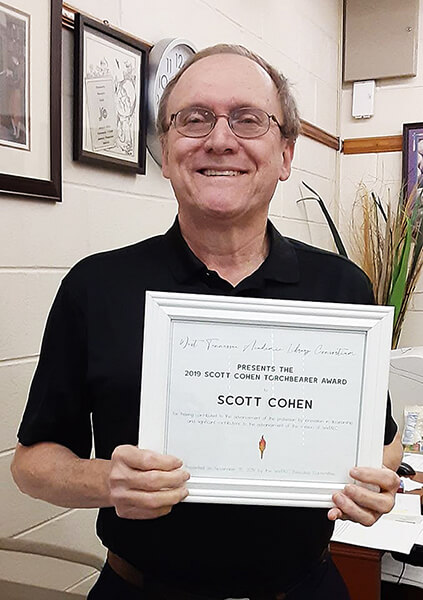 An organization of West Tennessee librarians decided to create a new award in honor of long-time member Scott Cohen, Director of the Library for Jackson State Community College.

The Torchbearer Award honors an individual who contributes to the advancement of the library profession through innovation – a description that fits what Cohen has done his entire career at Jackson State.

“I had no idea,” said Cohen, when asked about getting the award. “I was just totally moved ­­— really. I didn’t understand how I deserved it.”

WeTALC was started in 1967 to foster cooperation and share ideas among academic librarians and their staff in West Tennessee. When Cohen joined Jackson State in 1972 as the college’s Reference Librarian, he quickly became involved — and active — in the consortium.

He has co-hosted special meetings and a technical conference. For many years, he maintained the group’s website and he still maintains the group’s directory. When the group languished with no leadership, Cohen kept it going by prompting members to host meetings or to get a task done. “The organization is important,” Cohen said. “Librarians need a place to share ideas.”

Cohen feels good about the future of the organization. “I am glad that knowledgeable and enthusiastic librarians are taking WeTALC to a new level by changing the types of programs for the meetings and electing new officers.”

He continues to guide WeTALC as needed; for example, he has developed of list of suggested locations for the group’s twice-a-year meetings for the next 12 years.

Sylvia Rowe, Library Technology Specialist at Jackson State, credits Cohen for getting her interested in becoming an academic librarian and says he constantly looks for ways to better serve students and make the library more accessible to everyone. “He is open minded about technology and innovation in the library.”

The same energy he has used in being an active member of WeTALC is also used with innovative ideas for the Jackson State library.

Rowe calls him a lifelong learner. “If there is something new coming up in academic librarianship, I can guarantee that Scott already knows about it and has discussed it with other academic librarians. I find his intellectual curiosity refreshing, and I appreciate that he encourages that in me.”

Every day is a new challenge, Cohen said, adding that he has no plans to retire. Besides, he’s got that 12-year list of meeting locations to put in place.