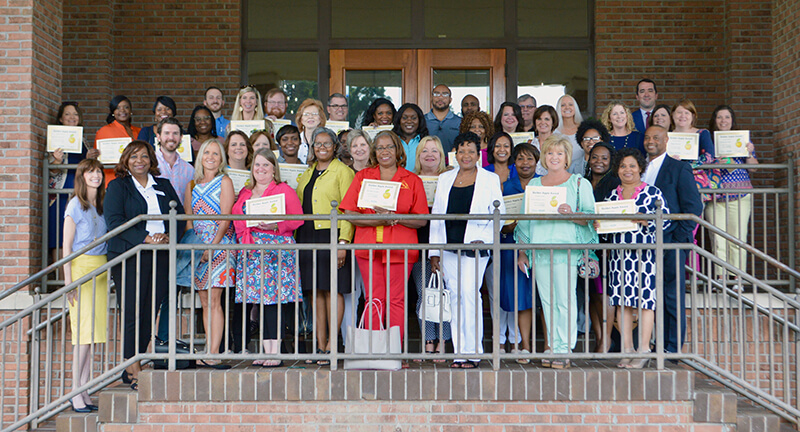 The Jackson Chamber honored educators and PIE Partners with its annual Education Recognition program during the Quarterly Membership Breakfast on May 23 at the Jackson Country Club. Golden Apple Awards were presented to schools and business Partners in Education (PIE) to show appreciation. The chamber’s Partners in Education sponsor is the Bank of Jackson. The Bank of Jackson’s Chairman and CEO, Gary Grisham, addressed the crowd and University of Tennessee Interim President, Randy Boyd was the speaker.

Golden Apple Awards are given to a business or education partner that has performed at least 10 activities for their partner or partners. Information must be reported in writing to Vicki Bunch prior to the deadline in order for a Golden Apple Award to be given.

This event was sponsored by the Bank of Jackson, which also handed out a $500 award by random drawing from Golden Apple school award recipients to Denmark Elementary. In two other random drawings from the Golden Apple Award winners, Delta Faucet Company and Ararat Baptist Church were winners. Delta Faucet Company won a promotional package from the Jackson Chamber that consisted of advertisements on Thomas Media - WWYN/WFKX/WHHM/WZDQ/WJAK, a member connection in the chamber’s video newsletter and one week advertisement in the Jackson Chamber’s Highlights email. Ararat Baptist Church won a “Ticket Package” consisting of four tickets to three Generals games for the 2019 season, plus two tickets to the next Quarterly Membership Breakfast.

If you would like a great way to volunteer time and resources for the betterment of public education and be community involved, become a PIE Partner. Contact Vicki Bunch at vbunch@jacksontn.com or call 731-423-2200.

Congratulations to all of our Golden Apple Award winners!

Schools that are winners include: