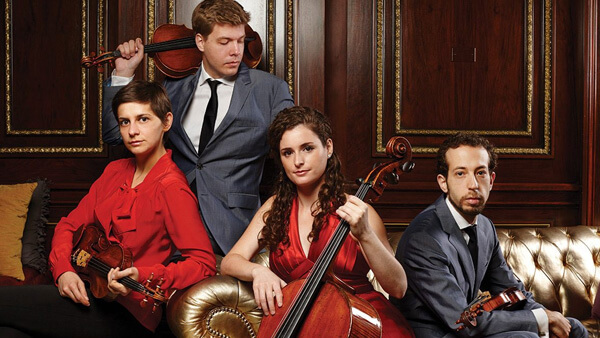 Union’s Music Department is delighted to host the Ariel String Quartet. Distinguished by its virtuosity, probing musical insight, and impassioned, fiery performances, the Ariel Quartet has garnered critical praise worldwide over the span of nearly two decades. Formed when the members were only just teenagers studying at the Jerusalem Academy Middle School of Music and Dance in Israel, the Ariel – celebrating their 20th anniversary in 2020-21 – was named a recipient of the prestigious Cleveland Quartet Award, granted by Chamber Music America in recognition of artistic achievement and career support. The ensemble serves as the Faculty Quartet-in-Residence at the University of Cincinnati’s College-Conservatory of Music, where they direct the chamber-music program and present a concert series in addition to maintaining a busy touring schedule in the United States and abroad.