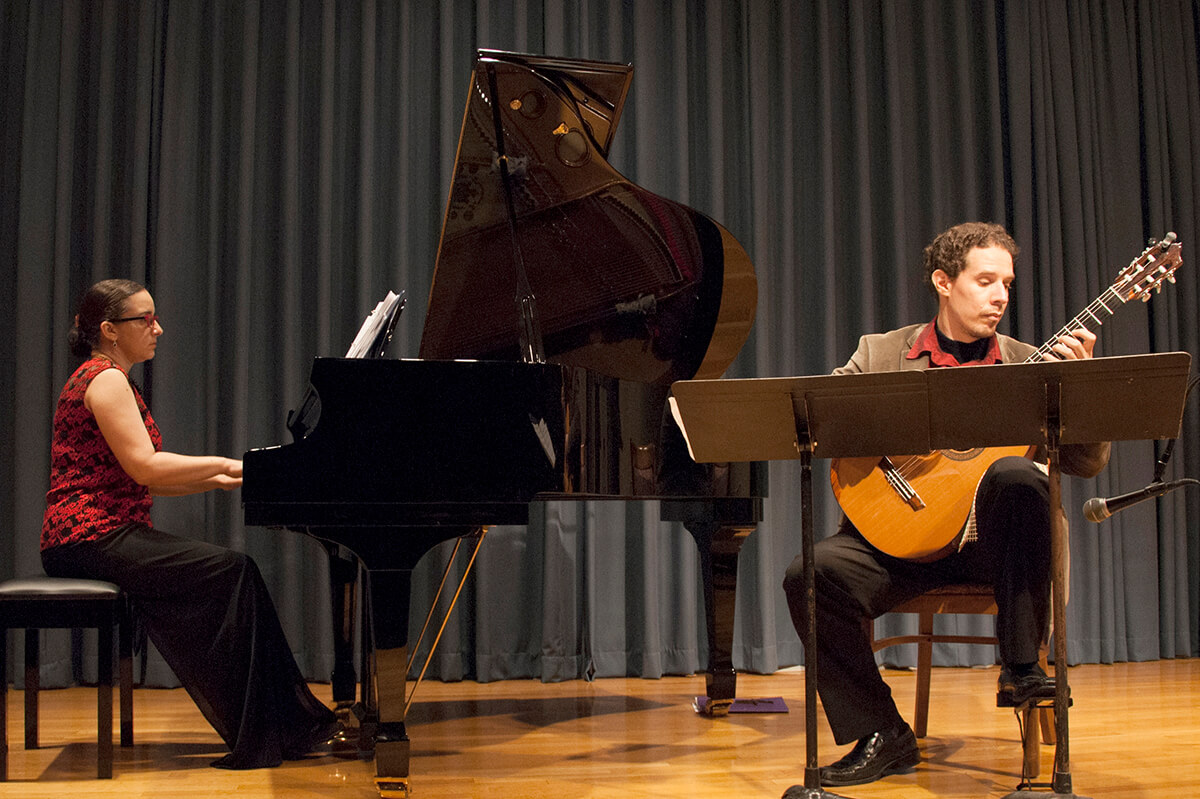 The musical duo of Dr. Amanda Virelles and Dr. Carlos Castilla are set to return for their tenth performance at the college. They will perform at the main campus in

The musical duo of Dr. Amanda Virelles and Dr. Carlos Castilla are set to return for their tenth performance at the college. They will perform at the main campus in Ayers Auditorium. The event is free and open to the public.

The International Education program of JSCC is hosting Virelles and Castilla. They are classically trained musicians who have been performing together for many years. While their repertoire is very broad with many styles of music, their performance is typically tailored to consist primarily of Spanish and Latin music.

The term Duo Guitiano is used to describe the instrumental combination of guitar and piano. Dr. Virelles plays piano and Dr. Castilla plays classic Latin American guitar. Both Virelles and Castilla have studied music in world-renowned universities and have performed in numerous orchestras and music ensembles.

Amanda Virelles is known as a versatile musician, who has played for audiences around the world. Her performances have been described as sensible, profound and energetic. She has performed as a soloist as well as collaborative artist throughout the United States, France, Russia, Colombia, Peru, Chile, Argentina, and Cuba. Currently, Dr. Virelles is assistant professor of Piano at Fayetteville State University in North Carolina.

Colombian-American guitarist, Carlos Castilla, has been featured as a soloist with orchestras and chamber ensembles, as well as in solo recitals in different cities of Latin America and the United States. He has worked as a collaborative artist with orchestras featuring stars such as Placido Domingo, James Galway, and Bernadette Peters. Carlos is the co-founder of Duo Guitiano, along with Cuban-American pianist Amanda Virelles, and is known for his innovative technique, clear sound, and soulful interpretations. Carlos currently teaches guitar courses at Coastal Carolina Community College, Fayetteville State University, North Carolina State and runs his private studio.

Mary Wadley, coordinator for this event, says, “This is an annual tradition and a gift to the community.” She continues, “This and other such events are hosted by the International Education committee at Jackson State. An emphasis on international education at the college is relatively new and this is a great way to communicate this to the community.”

Each year, Jackson State sponsors several students to study abroad through the program. As Wadley notes, “This is an opportunity most people do not associate with community colleges.”