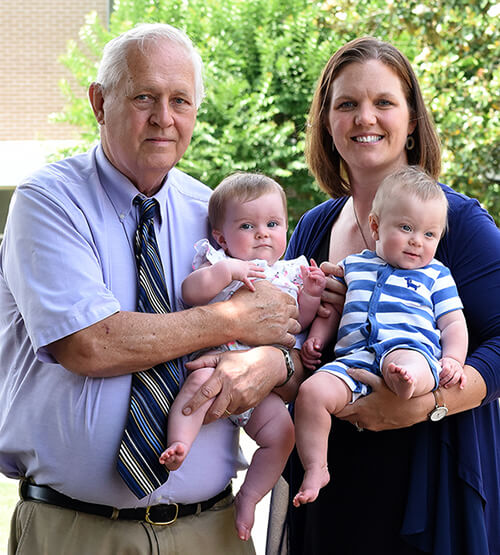 Father-Daughter teaching duo, Dr. Rodger Bates and Emily Fortner, with Madelyn and Benjamin Fortner who were born on October 22, 2018.

On the first day of the Fall 2018 semester and six months pregnant with twins, Associate Professor of Sociology Emily Fortner welcomed 40 new students to her Introduction to Sociology class at Jackson State Community College (JSCC).

Fortner was nervous about how the students would react to the news of a substitute professor teaching them in a few weeks, but she had a plan – she was bringing in a sociology professor with more than 50 years of teaching experience.

“Dr. Rodger Bates will take over in a few weeks as your professor, and he is very qualified to teach this class,” she told her students. What they did not initially realize was that Bates is her father.

In 1992, he transitioned into higher education administration and eventually became the president of the two-year branch campus of New Mexico State University in Alamogordo, N.M. Today he is a full professor for Clayton State University in Morrow, Ga., teaching online courses in sociology and homeland security.

Fortner, who has been teaching at Jackson State several years, earned her bachelor’s degree in from Lambuth and her M.A. in sociology from the University of Memphis.

Bates, aka Dad, volunteered to step in and teach Fortner’s class at Jackson State when she needed to go on maternity leave for the birth of her twins. Leading up to her absence, he visited the classroom and assisted with lectures and discussions.

“These initial visits were incredible,” Fortner said. “He strengthened the class lectures by jumping in and providing additional explanations and examples that I had never considered. Students got comfortable with him quickly and began asking more questions and participating in discussions.”

Students enjoyed the funny stories and personal examples the father/daughter teaching duo revealed about each other, Fortner said. “I realized we were the perfect balance of knowledge and comedy. Two generations, teaching sociology together.”

Meanwhile, Fortner delivered her twins, Madelyn and Benjamin, on Oct. 22, 2018.

She cannot thank her father enough, she said, for helping her out, helping Jackson State, and most importantly, helping the students by ensuring that their course would continue successfully without her. “While changing instructors during the middle of the semester is never ideal, I think it worked out well for the students.”