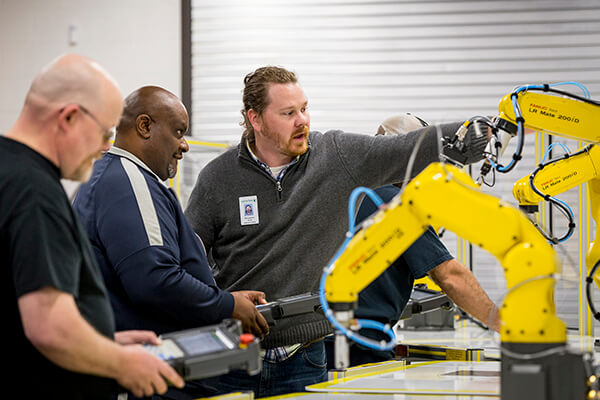 Employees from a local industry receive training on FANUC robotics at JSCC. To date, 42 local technicians have received training at the local F.A.S.T. Center.

Jackson State Community College has been designated as a FANUC Authorized Satellite Training (F.A.S.T.) Center. This designation brings high-level training to West Tennessee on FANUC robotics systems. FANUC America states that they have over 24 million products installed worldwide and are the most familiar brand of manufacturing automation.

JSCC received a $175,000 grant in 2017 that allowed the college to purchase additional cutting-edge equipment and to create a unique robotics training center for college’s Engineering Systems Technology students and current workers at companies in West Tennessee. Additionally, the college became a certified trainer for FANUC Handling Tool Operation and Programming. FANUC is the primary robotics brand used by manufacturers throughout the region.

As a F.A.S.T. Center, JSCC is one of only 12 authorized training centers in the U.S. This location is 1 of 3 located in the South. Other centers in the area are located in Alabama and Georgia. Local businesses can now take advantage of nationally-approved FANUC training without incurring the costs normally associated with employee travel.

“Jackson State has long been a trusted industry-training partner in West Tennessee,” said Messer. “We work closely with local business and industry to ensure that we provide them with quality training that is tailored specifically to their needs.”