At a special ceremony in Nashville February 13, three of Jackson State Community College’s students were honored for academic excellence. Hailey Jones, Debra Davis, and Hunter Harris were honored along with other students from Tennessee’s 13 community colleges. In all, there were 28 outstanding students that were named to the 2018 Phi Theta Kappa All-Tennessee Academic Team at a special luncheon at the War Memorial Auditorium in downtown Nashville. 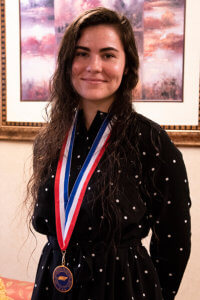 Hailey Jones of Pinson, Tennessee is an art major at JSCC and will receive an Associate of Arts diploma from the college on May 5. After graduation, Hailey will pursue a degree in art education from the University of Memphis. Her ultimate goal is to teach art at the college level. “Before coming to Jackson State, I always had plans to teach at the K-12 level,” said Hailey, “but my teachers at Jackson State have been such an inspiration. The college experience has been a real motivator for me.” 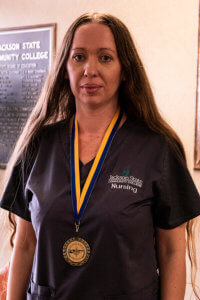 Debra Davis of Alamo, Tennessee came to JSCC after working in healthcare as a CNA and LPN. She is now pursuing a nursing degree at the college and is scheduled to graduate in Spring, 2019 and plans to work in hospice care. Her experience at Jackson State has been good. “It’s a great atmosphere where they want you to succeed,” Debra said. “They take you under their wing and give you the support you need to be successful.” 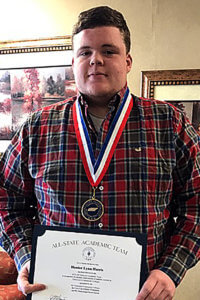 Hunter Harris of McKenzie, Tennessee will graduate in May with an Associate of Science in General Studies. Upon graduation, Hunter will continue his studies at the University of Memphis to pursue a Bachelor of Science degree in Exercise Science. His career goal is to obtain a doctorate in physical therapy and establish a practice in Middle or East Tennessee

Dr. Anna Esquivel, advisor and sponsor for Phi Theta Kappa at JSCC, comments, “Hailey, Debra and Hunter have demonstrated excellent leadership skills in Phi Theta Kappa. That they have been able to actively engage in their campus community while maintaining excellence in their studies is a testament to their academic achievement.”

Dr. Allana Hamilton, JSCC president, stated, “[Hailey, Debra and Hunter] deserve this honor, and we are very proud of their accomplishments. Their involvement in PTK has provided them with leadership opportunities that will better prepare them for the next steps in their academic and professional careers.”

Hamilton is very proud of the PTK chapter at JSCC. “Jackson State’s chapter continues to thrive,” said Hamilton. “I am very honored to work with the Jackson State chapter advisors and students in promoting academic excellence at Jackson State.”

The All-Tennessee Academic Team is comprised of students nominated by their colleges to be considered for the All-USA Academic Team, sponsored by USA Today and Phi Theta Kappa International Honor Society. Each of the state’s 13 community colleges selects outstanding students to recognize for their academic achievement, leadership and service to the community.

Phi Theta Kappa is the largest honor society in American higher education, with more than 2 million members and 1,200 chapters in the U.S. and beyond. Students must have a minimum 3.5 grade-point average to qualify for membership.