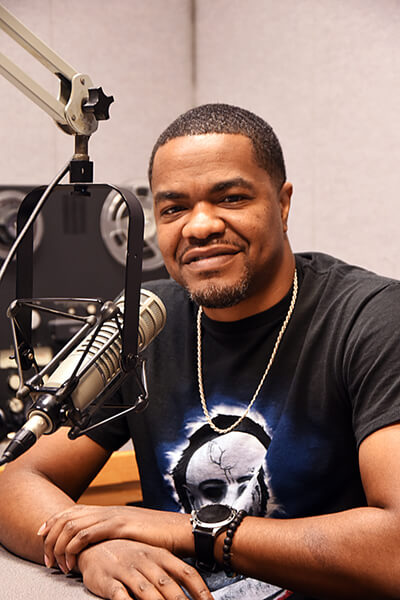 Gary Bills, Thomas Media was able to achieve his college degree with Jackson State through the Tennessee Reconnect program.

Gary Bills – known to many as G Billa on Hot 96.1 and 96 KIX – wanted to be flexible and keep his career options open with a college degree.

He entered Jackson State Community College through the Tennessee Reconnect program – an initiative to help adults return to higher education to gain new skills, earn a technical certificate or associate degree and advance in the workplace. It pays the remaining balance of tuition and mandatory fees after other state and federal financial aid have been applied.

Despite being a popular DJ and radio personality, Bills decided to earn an associate degree in mass communication, which he completed this past spring.

He said he loved the experience and would recommend Jackson State to anybody.

After working for several years in the restaurant industry, Bills joined Thomas Media in 2011. He wasn’t on air until 2016 because he wasn’t looking to work in radio. He is a hip-hop artist who visited the station often in an effort to get his music played.

His persistence paid off when longtime DJ Radio Rasheed invited him to be an intern with some other students. He stuck around, became a part-time board operator, and worked his way up while he worked other jobs to make ends meet. One day another DJ quit, and G Billa got his shot.

Today, Bills is on Hot 96.1 weekdays from noon to 6 p.m. and 96 KIX from 7 to 10 p.m. He’s also available for events and promotions. He is a significant influencer for hip hop fans in Jackson, and his time is dominated by his job.

He said he got discouraged trying to determine how to return to school while working. However, the Tennessee Reconnect program and Recruitment Coordinator Paula Fuller took the burden off and helped the process run smoothly. And, he spoke highly of teachers like Elaine Walker, Kim Warren-Cox and Abby Lackey, who taught him important career skills he knew he would use.

“You couldn’t have put a better core of teachers together,” he said. “If anybody took those teachers, they would love them.”