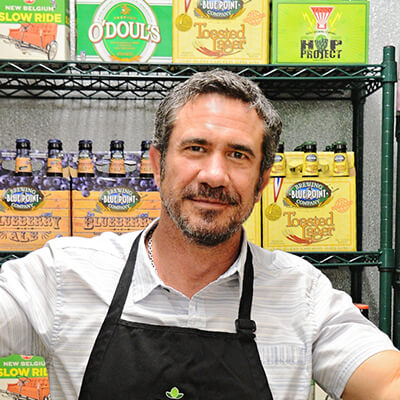 Chris Felder moved from McComb, Mississippi to to Nashville Tennessee after graduating from University of Mississippi with a BA in Business in 1987. His first full-time job was immediately thereafter with CMA - Country Music Association - as receptionist. From there, he started the Marketing Department with the worldwide Association, then became Director of Marketing and then Director of Digital Media. He retired from the organization in 2010, after having been employed there for twenty years. It was during his employment with CMA that he discovered an interest in the health and natural foods, and began attending seminars and workshops around the country to further his self- education in the field. In 2001, he helped found the first Turnip Truck store in Nashville, while still working with CMA. Upon the opening of the second location in 2010, Chris retired from the Association to work with Turnip Truck full-time. In 2015, he relocated to Jackson to bring some of his favorite things from those stores to what is now Grubb’s Grocery, located in the shops at Jackson Walk. Chris is now a full-time resident of Jackson, living in downtown, and his market employs ten full- time and part-time staff, all of whom are local residents.