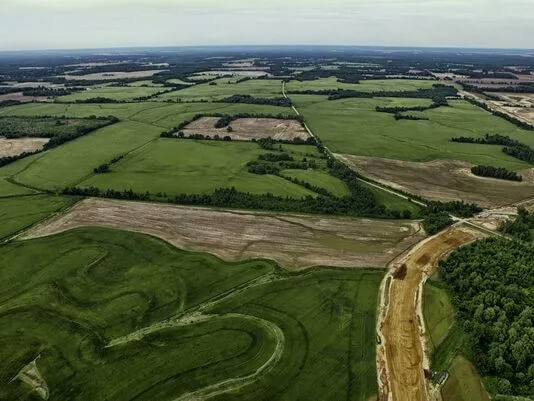 The 4,100-acre Memphis Regional Megasite could eventually be home to factories that bring thousands of jobs to rural West Tennessee. (Photo: Submitted by the Tennessee Department of Cconomic and Community Development.)

Securing a tenant has eluded the Memphis Regional Megasite, but Toyota and Mazda’s decision to build a $1.6 billion manufacturing plant in the U.S. has presented the Megasite another opportunity to land a major tenant.

The plant is expected to create 4,000 jobs and be in operation by 2021, which would transform any region — and would change the face of West Tennessee.

“We’re very interested in having the proposed Toyota/Mazda plant come here,” Gov. Bill Haslam said. “We would love to see that happen. It’s a very competitive process. There’s a lot of states that are interested in a plant with that amount of investment and that amount of employees. We’re actively pursuing that, and we’ll do everything we can to show people why this is the best automobile site in the country, we think.”

The Megasite, located 30 miles outside Memphis and 12 miles outside Brownsville, has had Hankook Tire Co. and Sentury Tire Americas look at the site in recent years, but those companies picked Clarksville and LaGrange, Georgia, respectively.

What could West Tennessee offer?

The 4,100-acre site is right on Interstate 40, which connects to Interstates 55, 24 and 65, making it easier for a tenant to reach suppliers, one of several advantages for the Megasite, according to Jackson Chamber President/CEO Kyle Spurgeon.

“The Memphis Regional Megasite was acquired and the infrastructure was developed with an automotive assembly plant in mind,” Spurgeon said. “There is no better large track of industrial land in the United States.”

An available workforce for the magnitude of the project is critical, and there is an estimated 1.6 million people within an hour’s drive of the Megasite.

Spurgeon said Tennessee has made strides in workforce development, and high schools, universities and colleges are better preparing students to transition into the workforce long term.

“It’s not just about 4,000 employees on day one when they open,” he said. “You’re ramping up to that number, but you have to make sure you’re supplying that workforce 10 years from now. Because companies make investments for decades. The things that Governor Haslam and his team have put in place to ensure a pipeline of trained workers is something that separates Tennessee from other states, especially from the South.”

“Toyota has operated here for over 10 years,” Spurgeon said. “They continue to expand. They’re great corporate citizens here, and on the other side they’ve invested in Tupelo, Mississippi. You’re looking at a Megasite that is going to be between two investments that Toyota has already had and been very successful with.”

Read more with The Jackson Sun.