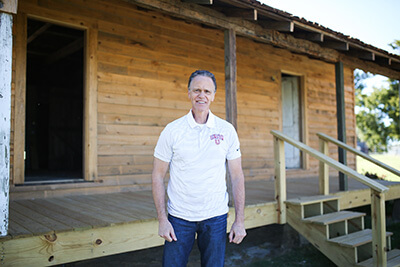 Ernest Easley, professor of evangelism at Union University, stands outside the R.G. Lee birthplace that will open on the Union campus Nov. 11. (Photo by Kristi Woody)

A piece of Southern Baptist history has been moved to the campus of Union University.

On Nov. 11, the university will open the newly renovated birthplace of R.G. Lee, which was moved to Union’s Jackson campus from Bellevue Baptist Church in Memphis.

“R.G. Lee was a leading statesman among Southern Baptists and other evangelicals during the middle years of the 20th century,” said Nathan Finn, dean of Union’s School of Theology and Missions. “Because of his ties to the Mid-South region and this university, it is fitting that his childhood home be located on the Union University campus so that younger generations can learn about the life and legacy of this important Christian leader.”

The 32 feet by 16 feet house was originally built in the mid-19th century in Fort Mill, South Carolina. Lee was born in the house on Nov. 11, 1886, to a family of sharecroppers. The opening of the home at Union will mark the 131st birthday of the renowned evangelist, pastor and orator.

Ernest Easley, professor of evangelism at Union, oversaw the moving and renovation of the home. He said this is the third time the home has been moved, but he hopes Union will be its final resting place. It was moved in 1970 from its original location in South Carolina to Camp Cordova, a Baptist camp in West Tennessee.

That camp shut down in the early 1990s, and the house was moved to the campus of Bellevue Baptist Church, where Lee had served as the pastor for 33 years, from 1927 to 1960. During his time as pastor there, he was elected as president of the SBC and served as a trustee of Union.

Easley said he first became aware of the house in 1998, when he visited Bellevue to meet with former pastor Adrian Rogers. The home was sitting in a fenced area behind the back parking lot of the church. When Easley joined the faculty at Union in 2015, he visited Bellevue again and saw that the home was still there and in need of renovation. He began discussions with Steve Gaines, Bellevue's current pastor and another Union alumnus, about moving the home to Union's campus, but he had no money to do so. He said a few members at Bellevue who knew Lee donated all of the money for the project.

“That’s the power of Dr. Lee’s legacy,” Easley said. “People that may have only heard him preach once still remember him. Having his home on Union’s campus will be a great way to pass on that legacy to a new generation.”

The house now sits on the edge of Union’s Jackson campus, where it can be seen clearly from the Highway 45 Bypass. The exterior of the house was rebuilt after the move from all new cypress lumber and hand-cut pine shingles, but the interior walls, doors, floors and ceiling joists maintain the original wood from the house as it was built in the 1800s.

The house will also contain several items on loan from Bellevue, including an original butter churn and wooden chest from the home as well as the original cradle Lee used as a baby. Other furniture displayed in the home is not original, but is appropriate for the time Lee would have lived there.

The opening of the home will take place at 2 p.m. Nov. 11 and include a brief presentation and a tour. While the home will remain locked most of the time, visitors can set up tours by contacting Abby Scott in the School of Theology and Missions at ascott@uu.edu or at (731) 661-6587.